Nick Way gets behind Genetic Research for Motor Neurone Disease

Veteran West Australian broadcast journalist Nick Way, is to become a patron of the Racing For MNDi Foundation to help raise awareness of the urgent need for more funding for genetic-based research into Motor Neurone Disease (MND). 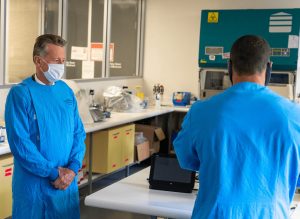 The patronage comes after Nick was himself diagnosed with MND in October 2020, nearly fourteen months after noticing occasional difficulties speaking the odd word.

The Perth-based charitable foundation Racing For MNDi is focussed exclusively on funding research that seeks to understand the influence of genetic mutations and variations in order to develop drugs to halt the progress of MND.

There are approximately 2,000 people living with MND in Australia with an incidence of approximately 1 in 11,400. It’s a neurodegenerative disease with no cure and the typical life expectancy for those with the disease is less than 3 years although it can vary greatly. The only approved treatment available, riluzole, extends life by about three months. There have been no new treatments or drugs approved for use in thirty years.

Historically, research funding has been channelled into understanding sporadic forms of MND – cases that arise with no family history but thought to be triggered by environmental or life-style factors –  as it was believed that genetic factors were only implicated in the approximately 10% of familial MND cases.

However in the past 30 years,  mutations in over 40 different genes have been connected to the disease and it is  now widely accepted that unknown genetic factors could be influencing almost all forms of MND. Despite that, it is an area that remains critically underfunded, which was the catalyst for Racing for MNDi’s approach.

The Racing For MNDi Foundation is one of the largest funders for the Murdoch University MND Research Partnership led by Professor Sue Fletcher, a pioneer in RNA therapeutics,  a type of genetic research that looks at altering the messages from specific genes to restore, switch off, or modify pathways and cell behaviours linked to disease. The foundation’s goal is to raise at least $1,000,000 in 2021 to help fund ground breaking collaborative research with a view to developing landmark drugs to halt the progression of neurodegeneration caused by MND.

“What we learn from inherited MND will benefit those with sporadic MND, and vice versa” said Professor Sue Fletcher. “A better understanding of the mechanisms underpinning MND will ultimately lead us to the answers that will help us beat this disease.”

Racing For MNDi founder Assunta Meleca said “Progress in MND has been staggeringly slow. Tens of millions of dollars have been invested in trying to understand the potential environmental  triggers behind sporadic at the expense of really getting underneath the genetic bedrock of the disease. We are delighted that Nick Way has agreed to be our patron to help raise awareness of the importance of researching  the genes already implicated in MND, and uncovering missing heritability.”

Nick Way said: “Younger and younger people are being diagnosed with MND and there’s still so much to learn. I want to support scientists to help define the disease and track down the causes. I feel really passionate about helping to accelerate vital research to give back time to those living with MND.”